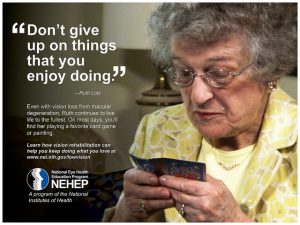 February is Low Vision Awareness Month. A leading cause of low vision and blindness in seniors over age 50 is age-related macular degeneration (AMD).

Metformin, a commonly prescribed drug for diabetes was found to also protect against age-related macular degeneration (AMD), a leading cause of low vision and blindness in American seniors over the age of 50. Researchers from Taiwan discovered that people with type 2 diabetes who were prescribed Metformin for diabetes also had a significantly lower occurrence of AMD. The study proposes that the anti-oxidative and anti-inflammatory effects of metformin can control diabetes and also protect against AMD. The results of their research were published by the American Academy of Ophthalmology (AAO), October 28, 2018.

It has been known for a long time that both inflammation and oxidative stress can trigger the development of diabetes and also AMD.

The researchers examined data on all the patients that had been recently diagnosed with type 2 diabetes from January 2001 to December 2013. They divided the participants into two groups:

The first group was made up of 45,524 participants who took Metformin.

The second group of 22,681 participants did not take Metformin.

The researchers followed both groups for 13 years and discovered that half as many patients in the Metformin group developed AMD as compared to the group that was not treated with Metformin.

According to the National Eye Institute (NEI), Age-related Macular Degeneration (AMD) is the leading eye disease that causes vision loss in people over age 50 in the United States. AMD causes damage to a small spot in the retina called the macula. It is a result of aging and strikes people over the age of 50. AMD destroys sharp central vision in one or both eyes. Central vision affects how we see things straight ahead. In some cases AMD progresses slowly, while in other cases it can advance very rapidly. Usually there is a blurred area near the center of vision. Besides aging, a history of AMD in the family and genetics also are a high risk factor for AMD. While there is no known cure for AMD, there are treatments to control some of the symptoms.

Follow a diet that contains lots of colorful vegetables such as:

Another study found that an Oriental or Mediterranean diet with lots of fresh vegetables could also lower the risk for getting AMD.

Some studies show that blueberries, grapes and grape seeds that are high in anti-oxidants may help to prevent AMD, but more research is needed.

Dietary supplements such as Vitamin C, Vitamin E, beta-carotene, zinc and copper were tested at the NEI in the AREDS and AREDS2 studies and found to be able to reduce the risk of late onset AMD by 25%. They also experimented by adding lutein, zeaxantin and omega-3 fatty acids from fish, but these were only beneficial when the beta-carotene was removed from this formula. All of these vitamins and nutrients can be obtained from food, but if your diet is lacking in fresh vegetables, fruits and fish then you should consult with your eye doctor about taking the following formula that was based on AREDS and AREDS2 research:

In its earliest stages there are no symptoms and AMD can only be detected by a dilated eye exam by a qualified ophthalmologist (eye doctor).

Our eyes are precious to us and we should do everything we can to preserve our eyesight as we age.