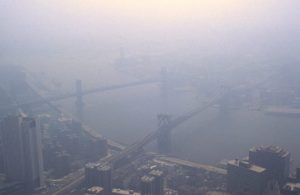 A study published June 29, 2018 in the Lancet Planetary Health Journal shows that air pollution is a high risk factor for contracting diabetes. In fact, according to the World Health Organization (WHO) and the US Environmental Protection Agency (EPA), even air pollution levels considered to be safe pose high risks for developing diabetes.

Air Pollution Lowers the Amount of Insulin Produced in the Body

According to the researchers, air pollution lowers the amount of insulin produced in the body. Previous research found that fine particles of dust, smoke, dirt, soot and drops of liquid are inhaled into the lungs and from there they get into the bloodstream and invade all parts of the body. These particles then cause major damage to health such as heart disease, stroke, cancer and kidney disease. The researchers believe that these polluting particles lower the amount of insulin produced in the body and this leads to inflammation. The inflammation prevents the body from converting glucose in the blood into energy that is needed by the body to insure good health. According to the study there are about 150,000 new cases of diabetes and 350,000 death every year caused by air pollution.

Diabetes Epidemic in the United States

Researchers from the University of Montana found hallmarks of beginning Alzheimer’s disease in the brain stems of infants less than one year old in air polluted Mexico City. They also found a high risk for suicide in youths with the APOE4 gene in air polluted Mexico City. The researchers came to the conclusion that in places like Mexico City where the air pollution was above the US standards, that Alzheimer’s disease begins in childhood and the next 20 years will see a large number of the inhabitants in these places in various stages of Alzheimer’s disease. They expect that there will also be many cases of early onset Alzheimer’s. The results of their study were published in Environmental Research in March, 2018.

Most Inhabitants of the World Live in Dangerously Polluted Places

The World Health Organization (WHO) claims that 92% of the inhabitants of the world live in places with dangerous amounts of air pollution.

If you or your loved one are in need of a short-term rehab or long-term skilled nursing facility, find one that is located in a place with a high rating for clean air like the Park Crescent Healthcare and Rehabilitation Center in East Orange, New Jersey. East Orange in Essex county has a good clean air rating of 90.81%.

Since more and more research shows the link between chronic and neurodegenerative diseases and air pollution, it certainly pays to try to live in an area with a clean air rating.