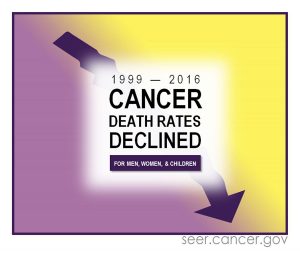 Good news! The “Annual Report to the Nation” published May 30, 2019 in the Journal of the National Cancer Institute shows that the overall numbers of deaths from cancer continue to decline among men, women and children. It is surmised that the decline in deaths is due to the fact that more and more people are quitting smoking and to new and better treatments. In fact, tobacco use is associated with 12 different kinds of cancer. To learn more about how quitting smoking and following a good lifestyle can cut cancer deaths in half,  see our blog post from March 7, 2019.

In this age group death rates and occurrence rates were higher among women than men with breast cancer at a much higher proportion.

Most Common Cancers among Women age 20-49 were:

Most Common Cancers among Men Age 20-49 were:

Rapid Decline in Deaths from Melanoma of the Skin

According to Dr. J. Leonard Lichtenfeld M.A.C.P. interim chief medical officer of ACS, the rapid decline in deaths from melanoma of the skin is believed to be due to new therapies like immune checkpoint inhibitors.

Melanoma skin cancer is an abnormal growth of cells in the skin that mostly develops on areas of the skin that are exposed to ultraviolet rays of the sun.  It is crucial for skin cancer to be diagnosed and treated early which gives a good chance for a cure. When melanoma skin cancer is allowed to progress, it can result in disfigurement or death. The problem is that sometimes a melanoma begins on a person’s back and goes unnoticed. It is recommended to have an annual head to toe skin examination by a dermatologist (skin doctor) once a year. Any unusual change to a mole should be examined as soon as possible by a dermatologist.

Death rates decreased among men for 10 of the 19 most common cancers, but increased for six cancers. The increases were for liver cancer, mouth and throat cancer and non-melanoma skin cancer.

Death rates in women decreased for 13 of the 20 most common cancers including the top 3 (lung and bronchus, breast and colorectal), but increased for 5 types of cancer. The highest increases were for cancers of the liver and uterus.

According to Dr. Robert R. Redfield, the director of the Centers for Disease Control and Prevention (CDC), a better understanding of the reasons for the different gender, ethnic and racial cancer death rates is needed.

If you or your loved one are in need of short-term rehabilitation or long-term skilled nursing care at the hands of a warm and caring staff, check out Park Crescent Healthcare and Rehabilitation Center in East Orange, New Jersey

Cancer death rates are continuing to decline which is good news.