Asthma is common among people aged 65 and older; more than two million older Americans have the condition. While most of those people have had asthma since they were young, it’s also not uncommon for seniors in their 70s and beyond to develop it for the first time. The problem is that adult-onset asthma is much more likely to be a serious, or even disabling disease. Learn about asthma in seniors and how treating the disease is particularly complicated for that population. 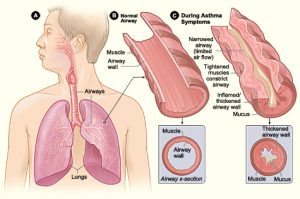 Asthma is a chronic lung disease that inflames and narrows the airways in response to certain stimuli. As a result, the linings of the airways swell and more mucus is secreted. This may cause chronic wheezing, shortness of breath, coughing, and chest tightness. As you can see in the diagram to the right, asthmatic airways are much more narrow and are full of mucus.

An asthma attack is a sudden worsening of symptoms, when the muscles around the airways tighten even more. Asthmatics always have some degree of narrowed airways, but in an attack, they become more swollen and produce thicker mucus. An attack can come on in response to an allergen, such as peanuts; an irritant, such as air pollution; or heavy physical activity. Some symptoms of an asthma attack are:

If you or your loved one have any of these symptoms, call 911 right away. An asthma attack is a medical emergency.

Asthma is known as a childhood disease, since its most common onset is in early childhood. Many children outgrow asthma before they hit their teen years, although in about 50 percent of cases it returns in their 30s or 40s. Seniors who develop asthma may have had it as children, or it may be their first time with symptoms. In that case, it usually flares up as a response to a virus or respiratory infection. Other common triggers are allergens, exercise, and environmental irritants.

Asthma is very serious in older adults, since it can quickly develop into respiratory failure. In addition, asthma symptoms considered mild in an elderly person are similar to severe asthma episodes in a child or younger adult. Elderly people also generally don’t go into remission the way a child might. Instead, their attacks may become more and more severe as time goes on.

Diagnosing and Treating Asthma in Seniors

It’s not hard for doctors to miss asthma, since its symptoms mimic other conditions, such as COPD or congestive heart failure. Also, wheezing and difficulty breathing following exercise is one major sign of asthma, and older adults just aren’t as active as younger people. If you notice your loved one is wheezing or short of breath from walking or other normal activity, bring it up with their doctor as soon as possible.

If we don’t recognize and treat asthma promptly, it will likely worsen and pose a serious health risk to the patient. Treating asthma in seniors is slightly more complicated, since most older people are on one or more drug. The more medications the patient is on, the more likely they’ll react with the asthma medication and cause side effects. Also, some medications for other health problems can actually worsen asthma symptoms.

Another difficulty with treating seniors is the standard L-shaped inhaler for oral doses. Using the inhaler can be hard for seniors who have coordination trouble, and as a result they may not get the right dose. Oral medications or dry powder inhalers are good alternatives for seniors.

If your loved one is showing signs of asthma, don’t wait. Speak with their doctor today.