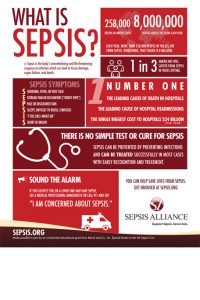 According to the Centers for Disease Control and Prevention (CDC), about 1.7 million Americans contract sepsis every year and about 270,000 of them die from it. Sepsis is the most common cause of death in non-cardiac intensive care units in American hospitals and is the 10th leading cause of death in the United States. Sepsis is an acute infection of the blood stream and commonly has been called “blood poisoning.” Sepsis can follow surgery or even develop after a small wound. Sepsis can progress rapidly throughout the body and lead to tissue damage, amputations, septic shock, organ failure and death. Now a new breakthrough treatment may have been found by researchers at the Eastern Virginia Medical School. By administering intravenous doses of combined Vitamin C together with low doses of steroids, Dr. Paul Marik was able to save the lives of people who were dying from sepsis. Results of this research were reported February 3, 2017 in the Chest journal.

How the Treatment was Discovered

This life-saving treatment was discovered in a very unusual way. Dr. Paul Marik, a critical care physician at Eastern Virginia Medical School (EVMS) was trying desperately to save the life of a young woman patient who was critically ill with sepsis. A few weeks earlier he had read that Vitamin C could be a possible treatment for sepsis and he also knew that patients with sepsis have very little or undetectable levels of vitamin C in their body cells. He also knew that Vitamin C and steroids work in a similar way, so he asked the nurses to mix Vitamin C with steroids and deliver these intravenously to the dying patient. Miraculously, within a few hours the patient was recovering and two days later she was well enough to leave the intensive care unit. Then they used this treatment on two more patients who were critically ill with sepsis and they also recovered. After this they continued to use the combination Vitamin C and steroid therapy, eventually adding Vitamin B1 thiamine to it because thiamine helps cells absorb Vitamin C.

Testing in a lab by Dr. John Catravas Interem Executive Director and Sentara Endowed Chair of the Frank Reidy Research Center for Bioelecrics at Old Dominion University, showed that neither Vitamin C alone or corticosteroids alone could treat the endotoxin of sepsis, but only when the Vitamin C and the steroids were combined they could work together against the endotoxin.

More Research Needs to be Carried out

More research needs to be carried out on larger numbers of patients to confirm that this treatment can safely save lives of people who are afflicted with sepsis.

Bacteria that are Resistant to Antibiotics

A growing problem today of global concern is the rise of bacteria that are resistant to antibiotics like MRSW. MRSW is a form of Staphylococcus aureus that is resistant to today’s antibiotics and therefore is very difficult to treat, especially if MRSW leads to sepsis.

Aging and Frailty Increase the Risk for Sepsis

The older one gets the greater is the chance to develop sepsis. Many seniors who contract sepsis get discharged from the hospital straight to short-term rehabilitation or long-term skilled nursing care, especially if the sepsis led to amputations.

Elderly sepsis survivors are often admitted to short or long-term skilled nursing and rehabilitation facilities such as the Park Crescent Healthcare and Rehabilitation Center in East Orange, New Jersey. Park Crescent is also well known far and wide in the area for their expertise with complex wound care. To read more about wound care see our blog post from February 1, 2019. Besides their skilled rehab team, Park Crescent also offers wonderful recreational activities and all kinds of amenities to make you or your loved one feel at home.

If further research verifies that this combined inexpensive Vitamin C/Steroids/Vitamin B1 Thiamine treatment is the best way to treat sepsis, then thousands of lives may be saved all over the world.