COPD, or chronic obstructive pulmonary disease, is a lung disorder that makes it hard to breathe. While there is no cure, there are several effective treatments that leave the lungs open and functioning. It is the 3rd leading cause of death in the United States with 13.5 million people diagnosed each year.

About 90% of people with this illness are current or former smokers. The disease usually appears after age 40. Secondhand smoke and exposure to environmental irritants and pollution also can increase your risk. In rare cases, the DNA passed down through a family can lead to COPD, even in never smokers. One of these genetic conditions is called Alpha-1 Antitrypsin (AAT) deficiency. 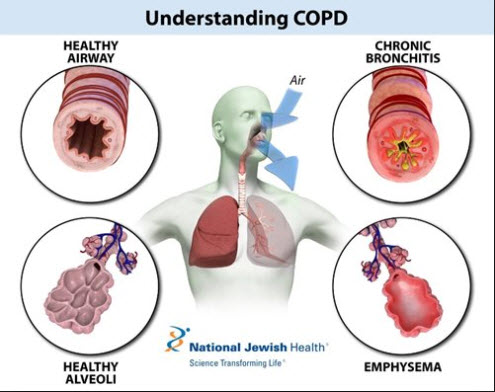 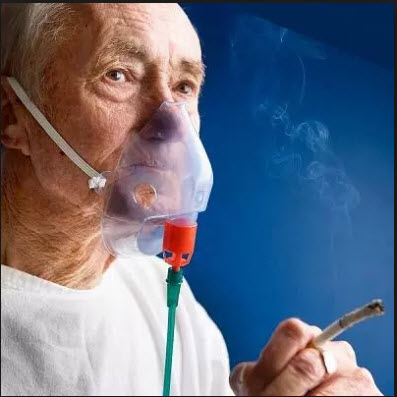 COPD, or chronic obstructive pulmonary disease, is a lung disorder that makes it hard to breathe. The first symptoms can be so mild that people mistakenly chalk them up to “getting old.” People with COPD may develop chronic bronchitis, emphysema, or both. It tends to get worse over time, but catching it early, along with good care, can help many people stay active and may slow the disease. There is no cure.

Inside the lungs, COPD clogs the airways and damage the tiny, balloon-like sacs (alveoli) that absorb oxygen. These changes can cause the following symptoms:

Severe COPD can make it difficult to walk, cook, clean house, or even bathe. Coughing up excess mucus and feeling short of breath may worsen. Advanced illness can also cause:

This condition is the main problem for some people with COPD. Its calling card is a nagging cough with plenty of mucus (phlegm). Inside the lungs, the small airways have swollen walls, constant oozing of mucus, and scarring. Trapped mucus can block airflow and become a breeding ground for germs. A  “smoker’s cough” is typically a sign of chronic bronchitis. The cough is often worse in the morning and in damp, cold weather.

Emphysema damages the tiny air sacs in the lungs, which inflate when we take in a breath and move oxygen into the blood. They also push out carbon dioxide, a waste gas, when we breathe out. When you have emphysema, these delicate air sacs can’t expand and contract properly. In time, the damage destroys the air sacs, leaving large holes in the lungs, which trap stale air. People with emphysema have great trouble exhaling.

First, your doctor will listen to your chest as you breathe, then will ask about your smoking history and whether you have a family history of COPD. The amount of oxygen in your blood may be measured with a blood test or a pulse oximeter, a painless device that clips to a finger.

Spirometry is the main test for COPD. It measures how much air you can move in and out of your lungs, and how quickly you do it. You take a deep breath and blow as hard as you can into a tube. You might repeat the test after inhaling a puff of a bronchodilator medicine, which opens your airways. Spirometry can find problems even before you have symptoms of COPD. It also helps determine the stage of COPD.

If bronchodilators don’t provide enough relief, people with COPD will take corticosteroids. These are usually taken by inhaler. They reduce inflammation in the airways. Also, steroids are given by pill or injection to treat flare-ups of COPD.

Pulmonary rehabilitation classes teach people ways to keep up with their daily activities without as much shortness of breath. Specific exercises help to build muscle strength, including the muscles used in breathing. Patients also learn to manage stress and control breathing.

Severe COPD lowers the oxygen in your blood, so extra oxygen is needed for your body. It can help you stay active without feeling as tired or out of breath and help protect your brain, heart, and other organs. If you have COPD and need supplemental oxygen, you will typically get the oxygen through tubing from an oxygen tank to the nostrils.

People with COPD are at greater risk for lung infections than healthy people. A cough and shortness of breath that gets worse is reason to contact your doctor. These are signs that a lung infection may be taking hold, and your doctor may prescribe medications to help knock it out as quickly as possible. You may also need adjustments to your  treatment regimen.

A small number of people may benefit from surgery. Bullectomy and lung volume reduction surgery remove the diseased parts of the lung, allowing the healthy tissue to perform better and making breathing easier. A lung transplant may help some people with the most severe illness who have lung failure.

Walking is one of the best things you can do if you have COPD. Start with just five or 10 minutes at a time, three to five days a week. If you can walk without stopping to rest, add another minute or two. Even if you have severe COPD, you may be able to reach 30 minutes of walking at a time. Use your oxygen while exercising if you are on oxygen therapy.

Smokers with COPD will lose lung function more quickly. Tobacco smoke destroys the tiny hair-like cilia that normally repair and clean the airways. Quitting stops the damage, and is simply the most important step you can take to control these disease.

A healthy diet is important for people with COPD. Being overweight makes it harder to breathe, and being underweight can make you weak.  Common diet guidelines include:

Many people with COPD also develop lung cancer, likely due to a history of smoking cigarettes. Researchers are studying whether specific genes make some people more vulnerable to COPD or cancer, or both illnesses. Chronic inflammation, caused by smoking or other lung irritants, is thought to act as a catalyst for cancer onset.

It’s important to stay active, even if you feel short of breath. You may need to pace yourself or use oxygen therapy, but staying active will make you stronger. Avoid secondhand smoke, chemical fumes, and other lung irritants.  Be sure to get vaccinated against the flu and pneumococcal disease. Wash hands frequently, and avoid all hacking, sniffling people during cold and flu season.

COPD is a serious chronic disease for which there is no cure, however, there are several effective treatments. Smoking is the #1 cause for this illness. If you are a current smoker, STOP RIGHT NOW!

Watch this important and informative video on COPD: