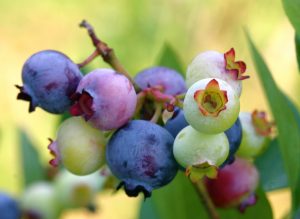 According to a new study, eating a cup of blueberries (Vaccinium corymbosum) every day lowers the risk for cardiovascular disease. The study by researchers at the University of East Anglia in collaboration with researchers from Harvard University and across the UK was published May 30, 2019 in the American Journal of Clinical Nutrition. In fact, the researchers discovered that consuming 150 grams of blueberries on a daily basis reduces the risk for cardiovascular disease by up to 15%.

According to the lead researcher, Professor Aedin Cassidy from UEA’s Norwich Medical School, metabolic syndrome significantly raises the risk for heart disease, stroke and diabetes. Statins and other medications are often prescribed to help to control this risk.

Previous research showed a high association between people who ate blueberries on a regular basis and a lower risk for type 2 diabetes and cardiovascular disease. Blueberries are high in beneficial anthocyanins which are flavonoids that give them their striking blue color.

Method of the Study

The research team examined the effects of eating blueberries on a daily basis in 138 obese people ages 50-75 with metabolic syndrome over a six-month period. This was the longest trial of its kind.

Participants Were Assigned to One of Three Groups

Two groups were given freeze dried powdered blueberries in an opaque sachet to take once a day as a blueberry drink or a smoothie that could also be added to cereals or yogurt:

Some ate 150 grams of blueberries (one cup).

The third group was given a placebo that could also be made into a drink or smoothie or added to cereal or yogurt in an opaque sachet, which was a purple colored powder made up with artificial colors and flavorings.

Out of the 138 participants, 115 completed the study. Those that ate one cup of blueberries every day for six months showed improvements in vascular function, lipid status and in stiffness of the arteries in spite of the fact that insulin resistance remained unchanged. This reduced the risk of cardiovascular disease by 12-15%.

The group that ate only 75 grams (half a cup) of blueberries showed no beneficial improvements, leading the researchers to believe that higher doses of blueberries may be needed in high-risk obese people with metabolic syndrome in comparison with the rest of the population.

If you or your loved one are in need of rehabilitation and skilled nursing care, the Park Crescent Healthcare and Rehabilitation Center in East Orange, New Jersey offers expert short-term sub-acute rehabilitation, as well as long-term skilled nursing care at the hands of a warm and caring staff. Park Crescent also provides diabetes monitoring and care. They have a great array of recreational activities and fine dining with a healthy and nutritious cuisine.

Blueberries are a healthy delicious treat and this study showed that after six months the risk for cardiovascular disease was reduced by 15% in patients who were obese and who had metabolic syndrome. Add blueberries to your diet!