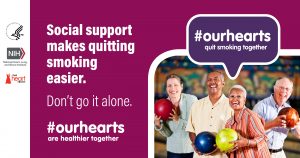 American Heart Month began on February 1 with the National Wear Red Day that was observed here at Park Crescent and all over the United States by people wearing red to raise awareness about heart disease. Heart disease is the leading cause of death in the United States.

According to the latest statistics, published January 31, 2019 by the American Heart Association (AHA) in their journal CIRCULATION, almost half of all American adults have some kind of cardiovascular disease that can lead to a stroke, heart attack or heart failure.

The National Institute of Health (NIH) has free cookbooks for download and offers many delicious heart healthy recipes and videos.

Tobacco Use is a Leading Cause of Preventable Death

Nicotine in tobacco leads to narrowing of arteries which in turn causes an increase in blood pressure and speeds up the heartbeat. This can lead to heart disease and heart attacks.

Smoking was responsible for 7.1 million deaths worldwide in 2016. Even though the rates for adult smokers has dropped in recent years, nonetheless, there has been a sharp increase in the numbers of teenagers using e-cigarettes.

According to the AHA, 1 in 6 males and 1 in 7 females smoke in the United States.

Obesity Epidemic is not Disappearing

According to a report published February 4, 2019 by the Cleveland Clinic, 75% of Americans are concerned about being overweight and 65% are concerned that it could lead to heart disease. However, they are not doing enough to try to lose weight. Also, most people feel they have to lose a lot of weight, but according to Dr. Steven Nissen, losing 5% of body weight can lower blood pressure, improve cholesterol levels and help to keep the heart healthy. He recommends losing weight slowly by eating fewer calories. He also recommends following the Mediterranean diet for good health.

If you or your loved one are after a cardiovascular event like a stroke or heart attack, the Park Crescent Healthcare and Rehabilitation Center in East Orange, New Jersey offers expert post-stroke and cardiac rehabilitation.

It certainly pays to take all the preventive steps possible to avoid having a cardiovascular event like a stroke or heart attack.