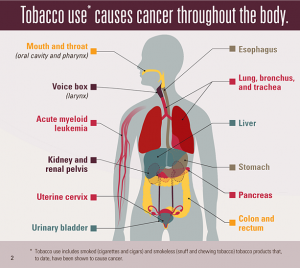 A study published by researchers from the American Cancer Society November 21, 2017 in CA: A Cancer Journal for Clinicians, showed that almost half of all cancers during the year 2014 could have been prevented. These cancers were caused by not changing preventable risks and had these lifestyle risk factors been changed the cancers would most likely have not occurred.

Cancer Deaths have Dropped in the United States

Since the early 90s cancer deaths in the United States have dropped by 25% mainly because many people have stopped smoking. In spite of this, smoking still remains the main number one cause of preventable cancer deaths.

According to the American Cancer Society study, the top lifestyle risks for cancer are:

Excess weight and obesity accounted for 7.8% of cancer cases and 6.5% of cancer deaths. Excess body weight was associated with:

Alcoholic drinking was associated with:

Consumption of red meat accounted for 5.4% of colorectal cancers.

Low consumption of fresh fruits and vegetables accounted for:

Low consumption of dietary fiber accounted for 10.3% of cases of colorectal cancer.

Not Getting Enough Calcium in the Diet

Low dietary calcium in the diet accounted for 4.9% of cases of colorectal cancer.

Not enough physical exercise was associated with:

Over Exposure to Ultra violet Radiation

Ultra violet radiation from exposure to the sun and indoor tanning beds cause about 75,000 skin melanomas and a higher number of non-melanoma skin cancers every year in the United States for a total of 4.3 million cancers that could have been prevented.

Infections with an Associated Risk for Cancer

Only infections that can be prevented by vaccines can prevent infection-related cancers such as the Hepatitis B vaccination and the Human papillomavirus (HPV)  vaccination:

Most Common Cancers in Descending Order

The most common cancers (listed in descending order according to estimated new cases in 2018 are:

Tobacco is Linked to 12 Types of Cancer

The Centers for Disease Control and Prevention (CDC) in their Morbidity and Morality Weekly Report (MMWR) of November 2, 2018, report that tobacco use is the leading preventable cause of cancer and is linked to at least 12 types of cancer:

If  you or your loved one are in need of short-term rehabilitation or long-term skilled nursing care at the hands of a warm and caring staff, check out Park Crescent Healthcare and Rehabilitation Center in East Orange, New Jersey.

It is sad that all of these cancer deaths with all of the human suffering that goes along with them could have been prevented with lifestyle changes.