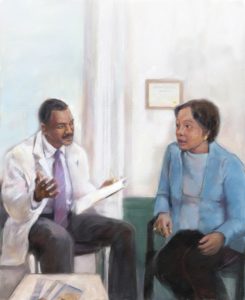 The doctor who breaks the news to someone that they have Alzheimer’s dementia does not have an easy job. There is very little hope the doctor can give about a chance to be cured from Alzheimer’s. The situation at present is this is not only a terminal illness, but there may be severe memory loss where a person may no longer recognize their loved ones. In fact, the first Alzheimer’s patient, Auguste Deter told Dr. Alois Alzheimer that she had forgotten herself – she could no longer remember who she was, who she was married to or who she was the mother of. For a patient, getting a diagnosis of Alzheimer’s disease is like being told they are going to die twice – first their personality and ego will die and eventually there will also be a physical death. In fact, many patients go into denial after receiving a diagnosis of Alzheimer’s disease, especially if they are only in early dementia. A study from the University of Oxford found that more than 69% of patients who are told they have Alzheimer’s disease do not go back to their doctors!

While massive funding is being poured into research to find a vaccine to prevent Alzheimer’s, a cure or a way to slow down its progression, to date nothing has been found. However, the search for a cure goes on. The National Institute on Aging is looking for people with early dementia to volunteer for clinical trials to try out new drugs or interventions. Participating in a clinical trial might lead to a breakthrough for a cure and you might get better. Also, the Alzheimer’s Association has a Trial Match to help you enroll in a clinical trial.

Life Must go on Even after a Diagnosis of Dementia

Since life must go one, the Alzheimer’s Association has a web-site called Live Well that has all kinds of helpful tools, videos and tips of encouragement for people who are still in the early stages of Alzheimer’s disease. Some of the topics there are:
Just diagnosed, you are not alone and all kinds of tips and suggestions on how to deal with your emotions.

Questions to ask your Doctor

There are also all kinds of important questions to ask your doctor such as:

What test(s) or tools did you use to determine my diagnosis?

This is a very important question and you can download the entire list of other questions to ask your doctor here.

You should know that some people have a kind of dementia that can be cured or reversed that resembles Alzheimer’s disease and Parkinson’s disease. It is called idiopathic normal pressure hydrocephalus (iNPH). Unlike Alzheimer’s and Parkinson’s, which to date are not curable, the dementia symptoms of iNPH can be reversed by 80% with shunt treatment. Unfortunately, this curable form of dementia sometimes gets misdiagnosed as Alzheimer’s disease or Parkinson’s disease that are not presently curable. In fact, it is estimated that about 20% of the people who have iNPH are not diagnosed or are misdiagnosed. It can be diagnosed with MRI or CT imaging. So you should ask your doctor if you had a CT or MRI scan of your brain to make sure you have not been misdiagnosed. If you have not had a CT or MRI, tell your doctor you would like to have one in case you have iNPH which can be reversed.

There are tips to learn how you can live a healthy life in spite of the fact that you have been diagnosed with Alzheimer’s disease.

Keep your Mind Active and Socialize

It is very important to keep your mind active by participating in memory games and cross word puzzles and to get out and socialize with other people.

Help for Caregivers, Helpline and Newsletter

The Alzheimer’s Association also has resources to help caregivers and family members, including a 24 hour Helpline:
1.800.272.3900

Life must go on even after a diagnosis of Alzheimer’s disease and keep in mind that research may still come up with a way to prevent it from progressing or even find a cure. The main thing is not to give up on hope.