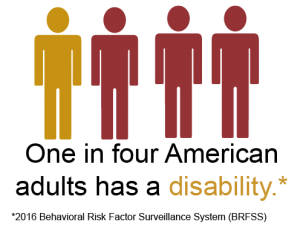 Today, December 3, 2019 is the International Day of Persons with Disabilities (IDPD).

The yearly observance of the International Day of Persons with Disabilities (IDPD) was proclaimed in 1992 by the United Nations General Assembly resolution 47/3. It aims to increase awareness about people with disabilities and to promote their rights and well-being in every aspect of political, social, economic and cultural life.

According to the Centers for Disease Control and Prevention (CDC), disability is defined as any state of the body or mind that limits activities and the ability to interact with the surrounding world.

Some kinds of disabilities affect:

According to the World Health Organization (WHO), disability has three dimensions:

Impairment is like the loss of a limb, loss of mental function, loss of vision or memory loss.

Six types of functional disability found in the American Community Survey were:

One in Four American Adults has a Disability

According to the CDC, nearly one in four or about 61 million Americans are disabled. Worldwide more than one billion people are disabled.

Mobility is the most Common Disability among American Seniors

According to the Census Bureau, nearly 40% of American seniors have at least one disability. Mobility is the most common disability among American seniors age 65 or older. Two-thirds of seniors (about 15.7 million people) said they had difficulty walking or climbing.

The second most common disability is difficulty living independently such as shopping or going to a doctor’s appointment.

Other Disabilities among Seniors

Other disabilities among seniors are difficulty hearing, cognitive problems, difficulty bathing or dressing and serious problems with vision.

Leading Causes of Disability in Seniors

According to a report by the CDC the three leading causes of disability in seniors are:

Older Americans with a Disability

Older Americans with a Disability: 2008-2012 is a report that was compiled from data collected during the American Community Survey that discovered the following:

If you or your loved one have disabilities, there may be a need for short-term rehabilitation or long-term skilled nursing care.

The Park Crescent Healthcare and Rehabilitation Center located in East Orange NJ, is considered the premier center for short term post-acute rehabilitation and sub-acute care in the area, as well as long term skilled nursing care.

It certainly is important to raise awareness about disabilities especially in the senior population.