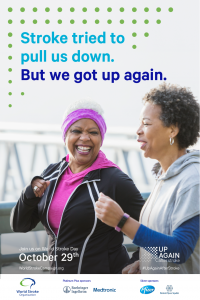 May is National Stroke Awareness Month and according to a news release published May 24, 2019 by the UCLA Newsroom, a new nerve stimulation procedure to increase blood flow may be able to treat an acute cortical ischemic stroke within a 24 hour period. The study was published in the LANCET journal.

The ImpACT-24B study led by Dr. Jeffrey Saver, director of the UCLA Comprehensive Stroke Center showed that this new nerve stimulation treatment increased blood flow in the brain, stabilized the blood brain barrier and reduced the size of the stroke area.

The Active Nerve Cell Cluster Stimulation treatment is a temporary implantation through the roof of the mouth, using only local anesthesia, of a small neurostimulator electrode. During the study, the electrode actively stimulated the nerve cell cluster four hours a day for five consecutive days. The nerve stimulation treatment worked by dilating arteries that had not been damaged by the stroke and bypassing the area blocked by the blood clot, so that the part of the brain cut off from blood flow could be treated. Also, the nerve cell cluster stimulation preserved the brain barrier, which prevents swelling in the brain. It also improved the ability of the nerve cells (neurons) to compensate for the injury by forming new connections.

The nerve cell cluster stimulation has some advantages over the two treatments currently in use for treating an acute ischemic stroke:

Two Treatments in Current Use for Treating an Acute Ischemic Stroke

The clot dissolving treatment using the drug alteplase (tPA) has to be administered within three hours of having a stroke and it might be able to dissolve a blood clot that is blocking an artery and restore blood flow. However, some patients have medical conditions that do not allow for this kind of treatment. Also, clot-dissolving does not work for all patients.

A stent retriever is threaded by a catheter through the femoral artery up to the brain to capture a clot and remove it in order to restore blood flow. Stent retrievers are sometimes used in combination with clot-dissolving. While this procedure can also be used up to 24 hours after having a stroke, the procedure has to be carried out by experts trained in this procedure and not every hospital or medical center may have someone with the expertise necessary to administer this kind of clot-retrieval treatment. Read more about strokes and clot retrieval in our blog post from February 15, 2019.

Future research will also examine the effectiveness of nerve stimulation when combined with clot-dissolving drugs and clot-retrieval systems.

Stroke Major Cause of Death and Disability in the United States

According to the Centers for Disease Control and Prevention (CDC):

If you or your loved one are in need of skilled nursing care after a stroke, check out the Park Crescent Healthcare and Rehabilitation Center in East Orange, New Jersey. Park Crescent offers warm and expert post-stroke nursing care.