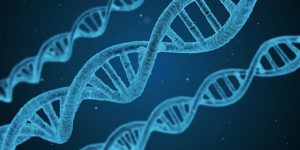 We’ve known for years that genetics play an important part in dementia. While age is still the number one risk factor for dementia, your genes also play a part in whether you will or won’t develop dementia later in life.

Until now, researchers have identified genes associated with Alzheimer’s disease, but there

was no clear data on how these genes caused the dementia’s progression. We didn’t really know exactly which genes contributed to the development of the disease. But a new discovery earlier this month will boost our ability to produce the first anti-dementia drug.

It’s in the Genes

Tau is a protein that helps keep our healthy nerve cells structured and rigid. When dementia starts developing, the tau starts clumping together, forming the infamous tangles that are the hallmark of Alzheimer’s disease. Not only can these tangled tau proteins no longer support their nerve cells, their tangles actually

start killing off the nerve cells. That’s when the symptoms of dementia begin.

The study mentioned earlier wanted to find the genetic origin of these tangles, in order to find ways that would prevent them from happening in the first place. The team at UCLA, led by Dr. Daniel Geschwind, discovered two major groups of genes involved with the mutations that result in the tangles of tau.

They then searched a database of experimental drugs and their genetic effects. Using human cell cultures, they tested the drugs to see which ones interfered with the neurodegeneration of the nerve cells.

Our study is the most comprehensive published effort to date to identify the source of neurodegeneration across species and provides an important roadmap for the development of potentially effective new drugs for Alzheimer’s disease and other dementia.

As Alzheimer’s disease and dementia affects over 5 million people in the US, and there is currently no treatment for most forms of the disease, we at Park Crescent applaud this study.

We hope this will lead to more research and drug development for dementia, and the eventual cure.