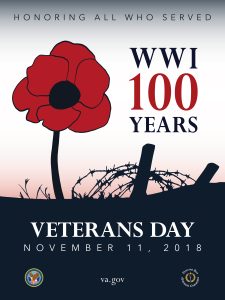 That day marked the end of World War I, when the armistice between Germany and the Allied nations came into effect at the 11th hour of the 11th day of the 11th month of 1918.

The following year, President Woodrow Wilson proclaimed November 11th as Armistice Day. He said it would be “filled with solemn pride in the heroism of those who died in the country’s service and with gratitude for the victory.”

Armistice Day, a day dedicated to honoring the veterans of the Great War, officially became a legal holiday in 1938. After World War II broke out a few years later and saw the greatest mobilization of service men in our country’s history, there was a push to change the holiday to honor all veterans.

In June 1954, November 11 became Veterans Day—the day to honor all American veterans. When November 11th falls on Sunday, as it does this year, Veterans Day is observed on Monday, November 12th.

Many national chains offer free meals to veterans and current members of the military on Veterans Day. Today’s the perfect day to take the veteran in your life out for a meal at Applebee’s, Chili’s, Dunkin’, or Starbucks, among others.

Join us at Park Crescent in honoring our armed forces this Veterans Day.