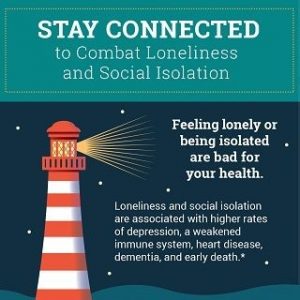 A new study by researchers from the University College London (UCL) published August 2, 2019 in PLOS Medicine gives evidence that people who are socially active at the ages of 50-60 have a lower risk for dementia later in life.

The 10,228 Participants in the study were from the Whitehall II longitudinal prospective cohort study of employees of London civil service departments, who were aged 35–55 at the beginning of the study in 1985–1988 and followed to 2017. Results of this study give strong evidence that reducing isolation and loneliness may lower the risk for dementia. The researchers found that people who had contact with friends almost on a daily basis at age 60 had a 12% lower risk for developing dementia than those who only got together with friends every few months. This suggests that socialization with friends may have a protective effect against developing dementia. The study noted that social contact with friends rather than family showed the positive association for a reduced risk of dementia.

While previous research had also shown a link between socialization and dementia, they did not have long follow-up times. However, this new study was carried out over a 28 year period so it gives much stronger evidence that socialization indeed can help lower the risk for later life dementia.

How Socialization Lowers Risk for Dementia

According to Professor Gill Livingston, people who socialize with friends are using cognitive skills such as memory and language which may build up aa reserve to help them to cope better with aging. He also says that having a good time with friends could be good for mental wellbeing. Also, getting out with friends may also be helping them to be more physically active.

Social Isolation a Risk Factor or an Early Sign of Dementia

Fiona Carragher, the Chief Policy and Research Officer at the Alzheimer’s Society UK welcomes the research, but added that there still is not enough evidence to show if social isolation is a risk factor for developing dementia or rather an early sign of dementia. Some research has suggested that withdrawing from friends and family is one of the early signs of dementia.

Future research is needed to see if preventing social isolation can be used as an intervention to prevent the development of dementia.

Alzheimer’s disease (AD) is the most commonly found dementia in the United States and worldwide. According to the National Institute on Aging (NIA), more than 5.5 million Americans, mainly seniors, suffer from Alzheimer’s disease, which is a progressive incurable disease. Alzheimer’s causes severe memory loss and cognitive decline, psychiatric and behavior disorders, sleep disruptions, agitation and in its final stages a total inability to carry out even the most simple day-to-day tasks. Alzheimer’s is the 6th leading cause of death in the United States, although according to the NIA it may really be the third leading cause of death because many cases go unreported.

See our blog post from March 6, 2019 about how a woman was successfully treated for Alzheimer’s disease by hyperbaric oxygen therapy (HBOT). HBOT is also used for treating complex wounds. See our blog post from February 1, 2019 about the HBOT treatment that is currently in use for complex wound care and healing at Park Crescent Healthcare and Rehabilitation Center. In fact, Park Crescent has had many success stories using this treatment.

If a senior is in need of short-term rehabilitation or long-term skilled nursing care, this may help to end their social isolation. In fact, you should look for a facility for your loved one that offers a very rich program of recreational activities. The Park Crescent Healthcare and Rehabilitation Center in East Orange, New Jersey has wonderful recreational programs that encourage socialization.

Go out with friends and have a good time. Try to make outings a chance to also get some physical exercise.