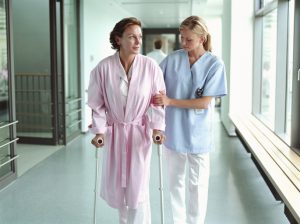 A special kind of therapeutic shoe was designed to improve stroke recovery in people who are left with a dragging foot. The shoe was engineered by Moterum LLC a startup company located in the University of South Florida (USF) Research Park. Clinical trials have been completed on the iStride shoe which is supposed to hit the market by the end of the year. Results of this newly developed shoe were published August 28, 2019 in the Journal of NeuroEngineering and Rehabilitation.

Gait Asymmetry is the result of partial paralysis on one side of the body and this affects the stroke survivor’s ability to walk properly. This gait asymmetry is associated with balance problems and falls and injuries.

The iStride device is strapped over the shoe on the healthy leg. As the person walks the iStride makes a backwards movement and this makes it more difficult to walk while wearing this iStride shoe. This strengthens the leg that has been damaged by the stroke. When the shoe is removed the gait becomes more symmetrical. A matching shoe is placed on the stroke impaired foot which remains stationary. According to Kyle Reed, the developer of the shoe and an associate professor of mechanical engineering, the good thing about this is that the person wearing this shoe is in control. He also states that this shoe device is passive, portable, wearable and does not need any kind of external energy. Click here to see a video of the iStride device.

Participants in the trial were six stroke survivors aged 57 and 74 who had experienced a brain stroke at least a year prior to the launching of the trial. All of them had gait asymmetry that was extensive enough to affect their ability to walk properly.

Each participant was given twelve 30-minute gait training sessions for a period of four weeks. The participants were under the guidance of a physical therapist. Their gait symmetry and functional walking were measured using the ProtoKinetics Zeno Walkway system in the Human Functional Performance Laboratory at the University of South Florida.

Results of the Trial

All of the participants showed improvement in their gait symmetry and walking speed. This included how long it took to stand up from a sitting position and walk. It also measured how long it took them to walk to a specific location and the distance traveled within six minutes. Four of them showed improvement with the amount of time spent in a gait cycle with both feet planted on the ground. This is called double limb support. Of the two who did not improve in this area, one of them had begun the trial with a severe impairment. The other one was highly functional. Three of those who participated in the study had to walk only in their homes. However, after the trial was finished, two of these could now successfully walk in public areas.

The developers compared the iStride shoe device with a previous study on split-belt treadmill training (SBT), which is also used to help stroke patients improve their gait. However, the SBT does not strengthen double limb support like the iStride shoe device. This previous study showed that only about 60% of stroke patients who trained on the SBT had their gait corrected when walking in a normal environment.

A major advantage to the iStride shoe device is that it is portable and can be used at home or wherever the person goes unlike the SBT treadmill that can only be used in a clinic setting.

The team from the University of South Florida is now at work on a new home-based clinical trial that has 21 participants.

According to the Centers for Disease Control and Prevention (CDC):

Early Action Is Important for Stroke

Know the warning signs and symptoms of stroke so that you can act fast if you or someone you know might be having a stroke. The chances of survival are greater when emergency treatment begins quickly. To read more about how crucial it is to get medical help as fast as possible for a stroke see our blog post from February 15, 2019.

This unusual shoe that can boost a stroke survivor’s chances to regain motor skills like walking should be welcome.