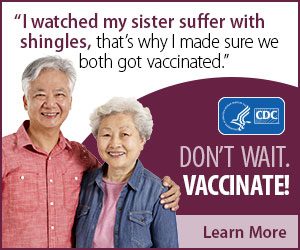 Seniors need to be vaccinated against certain infectious diseases. Not all vaccines are only for children. As a matter of fact, some vaccines that are very important for seniors to take are the tetanus diphtheria (TD) vaccine, the pneumococcal vaccine, the shingles vaccine, the measles, mumps and rubella (MMR) vaccine and annual flu shots.

The tetanus diphtheria (TD) vaccine or boosters need to be taken by all adults including seniors every 10 years. For seniors who work with animals or garden this is crucial, as tetanus spores are found wherever there are animals and dirt. In fact, there are cases reported where people contracted tetanus just from being pricked by a rose thorn. Unfortunately, many adults, including seniors, fail to get their boosters every 10 years.

Tetanus also called lock-jaw is a horrible diseases that causes terrible muscle spasms that cause excruciating pain, especially in the jaws. Diphtheria is a very serious lung disease that was thought to be going extinct, but is making a comeback, mainly because of people who refuse to vaccinate their children.

Herpes zoster, more commonly known as shingles, can be a very serious disease in seniors that can have a very bad effect on the quality of life. Shingles is caused by the same herpes virus that causes chicken pox. The chicken pox virus never leaves the body of people who get chicken pox. The chicken pox virus lies dormant in the body for years and for some reason can erupt again in old age as an entirely different disease. In fact, aging is the greatest risk for developing shingles and the risk increases with age. The National Institute on Aging (NIA) estimates that one in three people will get shingles as they age.

Shingles attacks the nerves or blocks of nerves in the body. It usually begins with an unusual looking rash that resembles shingles on a roof. Shingles can take weeks, months and even years to go dormant and clear up. In fact, some people get a chronic state of shingles and chronic pain called post herpetic neuralgia. Shingles can greatly interfere with the quality of life.

Fortunately, there is a new vaccine against shingles called Shingrex, which is more than 90% effective. This replaces the former Zostavax vaccine. Shingrex needs to be given in two separate injections.

Measles, mumps and rubella tend to be much more serious and even deadly when they strike at seniors. If you had these diseases as a child you are most likely never going to get them again. However, if you did not have these diseases in childhood and were never vaccinated against these diseases, then you should check with your doctor about getting the MMR vaccine. In fact, right now measles has made a comeback in several countries and there are also outbreaks in the United States. The CDC is recommending the MMR vaccination for anyone that was never vaccinated especially if they are planning to travel outside of the United States. Measles is one of the most contagious diseases and is easily spread by sneezing and coughing or just breathing. According to the CDC, if a person has measles, 90% of people around them will also catch the measles. Measles can lead to permanent disabilities like deafness, vision loss and brain damage.

The influenza vaccine commonly called the flu shot is different from most other vaccines that are given only once or twice to give lifelong immunity. The flu shot has to be given every year, as it has to be tailored to whatever flu strains are in season. There is a need for a universal flu vaccine that would only have to be given once or twice to give lifelong immunity for all strains of the flu. Scientists are trying to produce it and hopefully they will soon succeed.

When looking for a rehab or skilled nursing facility, make sure that the staff have all been vaccinated for the flu and other contagious diseases like measles. The Park Crescent Healthcare and Rehabilitation Center in East Orange, New Jersey has a very high rate of caring staff per resident and they are all vaccinated.

It certainly pays to get vaccinated against these diseases. Vaccines can save suffering, disabilities and lives.