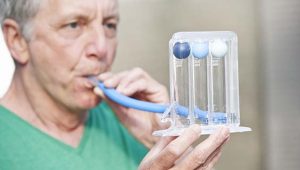 Spirometer to Check for COPD (NIA)

Chronic Obstructive Pulmonary Disease (COPD) is a lung disease that can leave a person in a state of breathlessness and gasping for air. COPD is a major cause of disability and is the 4th leading cause of death in the United States. According to the National Heart, Lung and Blood Institute (NHLBI), 16 million Americans have COPD.

Smoking from cigarettes is the main cause of this disease and is responsible for 75% of the people afflicted with COPD. Also, pipes, cigars and other inhaled kinds of tobacco smoke can cause COPD. However, fine particle air pollution from a workplace or from open fires, second-hand tobacco smoke and rare genetic factors can also cause COPD.

COPD develops slowly and usually begins around the age of 40 and can first present with milder symptoms like smoker’s cough, but if left untreated and if the person continues to smoke it can progress until it reaches the point of no return as far as lung damage is concerned. Advanced states of COPD can affect the quality of life, as breathing becomes more and more difficult and can make a person dependent on being in close proximity to an oxygen tank. While some kinds of oxygen tanks are portable, nonetheless, COPD puts many limitations on day-to-day activities. In severe cases it can interfere with walking, cooking or just taking care of yourself. Many people with COPD cannot walk up stairs and in many cases they have to move to a home without stairs.

COPD is Composed of Two Progressive and Incurable Lung Diseases

According to the National Heart, Lung and Blood Institute (NHLBI), COPD is really an umbrella term for two progressive incurable lung diseases that are defined as COPD. These are emphysema and chronic bronchitis and most people with COPD suffer from both of them, so the term COPD is more appropriate.

Emphysema is when the air sacks in the lungs become too damaged to function. Struggling to breathe and chronic coughing causes these air sacks called alveoli to be damaged:

The lining of the airways is irritated and inflamed and this causes the lining to swell and also get plugged up with mucus making breathing difficult.

Some of the symptoms can be from other respiratory problems and not necessarily from COPD. Your doctor can examine you with a spirometer to measure pulmonary function. The spirometer measures how much air you breathe out and how fast you can breathe air out. Spirometry can detect COPD before there are signs of it. Spirometry can also show if you are suffering from asthma or heart failure rather than COPD. Here are the symptoms that may be COPD:

Treatment may be from medicines, oxygen therapy and bronchodilators to help to open the airways and relieve congestion. In some cases there may be a reason for surgery. None of these treatments will cure COPD but will focus on:

Quit smoking and if necessary seek out support help to quit such as:

This devastating disease is preventable by not smoking and quitting smoking can help to delay the progression of COPD.